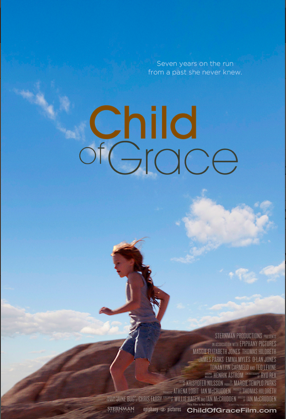 Nine-year-old Katie Johnson (Maggie Elizabeth Jones) has spent most of her life traveling the country in an RV with her father (Thomas Hildreth). One day, she sees a portrait of herself on a missing child poster and realizes that the man she believes to be her loving father may actually be her kidnapper.As Katie contends with this discovery, her grandfather, a small-town police chief in Millinocket, Maine (Ted Levine), happens upon new evidence related to her disappearance. Chief Hadley Edwards is steadfast and determined to figure out the truth, until he makes a disturbing discovery that will haunt his small town forever. Child of Grace, Ian McCrudden‘s tenth feature film, is based on the novel June Bug by Chris Fabry (Tyndale House Publishers, Inc. 2009)